The research entitled “The Characteristics of School’s Culture at Integrated Islamic School of Harapan Mulia Palembang” which was aimed to describe, analyze, and interpret the culture of SIT Harapan Mulia Palembang to find the concept of integrated Islamic School cultyre. This is a case study in the frame of ethnography. The respondent were the director of SIT Harapan Mulia, the principal, the teachers, the students, the librarian, the general staff, the canteen staff, student’s parents and the people who live near the school, all of them were selected by purposive sampling. The data was collected by using observation, interview and documentation. The data then analyzed by combining Creswell and Mathew and Hubermen’s models through three stages, they were data reduction, data display or description, and data interpretation/verification. To check the data validity, the writer used the triangulasi method, member checking and prolonged observation. The results show that the cultural characteristics of the Integrated Islamic School are (1) making Islam a philosophical foundation, (2) integrating Islamic values ​​into the curriculum development, (3) implementing and developing learning methods to achieve optimization of the teaching and learning process, (4) prioritizing qudwah hasanah in shaping the character of students,(5) cultivating biah solihah in the climate and school environment, (6) involving the role of people and society to support the achievement of educational goals, (7) prioritizing the value of ukhwwah among school members, (8) building a culture of healthy care and beautiful, (9) ensuring that the entire school activity process is quality oriented, (10) fostering a high culture of professionalism among educators. Then the character of the Harapan Mulia Integrated Islamic School students, namely, the character in relation to God habluminAllah, the character in relation to oneself, the character in the relationship with fellow habluminannas, the character in relation to the environment, the character in the relationship with the community and the nation.

TEMPLATE OF RESEARCH BASED ARTICLE

TEMPLATE OF CONCEPTUAL BASED ARTICLE 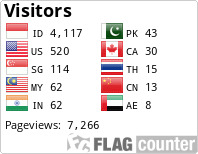