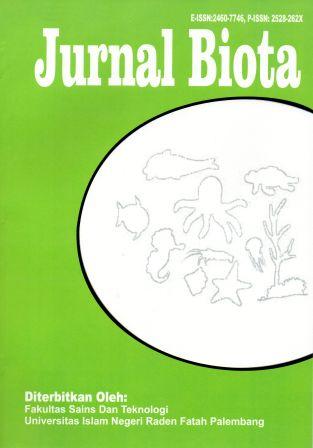 East Java is a province that has various geographic characteristics. some of the geographical features that exist have a forest that is the habitat of dragonflies and dragonflies. one of the dragonfly needles that live in the forest is Rhinocypha heterostigma. the species is spread in western Java and central java. research on the characteristic and distribution behavior of such species in eastern Java has not been previously disclosed. This study aims to determine the distribution, characteristics and behavior of rhinocypha heterostigma in eastern Java. the methods undertaken in this study are direct observation and collection of specimens. observations show several locations there are species such as Kakek Bodo Waterfall, Sumber Mangli, Mountain Pundak, Tretes Waterfall, Coban Glotak and Ireng-ireng streams. Rhinocypha heterostigma found in eastern Java has a dark color pattern to almost the entire wing. leaving a transparent color only at the base of the wing with a slight blue pattern in the center of the wing. this species is often found along with Euphaea variegata and territorial contests. This spesies always perch on leaf, twigs and rocks among the water streams. This Research show that Rhinocypha heterostigma found at Six location in East Java and the highest Population is at Sumber Mangli.

1. Authors retain copyright and grant the journal right of first publication with the work simultaneously licensed under a Creative Commons Attribution License that allows others to share the work with an acknowledgment of the work's authorship and initial publication in this journal.

2. Authors are able to enter into separate, additional contractual arrangements for the non-exclusive distribution of the journal's published version of the work (e.g., post it to an institutional repository or publish it in a book), with an acknowledgment of its initial publication in this journal.

3. Authors are permitted and encouraged to post their work online (e.g., in institutional repositories or on their website) prior to and during the submission process, as it can lead to productive exchanges, as well as earlier and greater citation of published work.